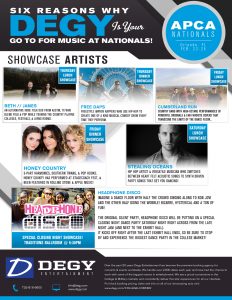 Thanks for joining us at APCA Nationals in Orlando! If you missed any of our showcasing artists, we got you covered!

Beth // James is an alternative indie folk duo from Austin, Texas made up of singer-songwriters Jordan James Burchill and Mikaela Beth Kahn. Their haunting harmonies, moody guitar, and thoughtful lyrics create a captivating atmosphere. The pair met in 2008 while studying music at the University of North Texas. They quickly realized their musical chemistry and began playing together with various bands all over Texas. They’ve recorded albums, and performed everywhere from the Granada in Dallas to The Triple Door in Seattle, and The Gallery (at The Continental Club) in Austin. But now they’ve come together with their own unique expression of Americana. A blend of modern folk, mindful pop, and lush soundscapes.

The duo was recently selected as one of Kerrville Folk Festival’s 2016 New Folk regional finalists, are finalists in NewSong’s national LEAF 2016 Singer-Songwriter Competition, and won top honors in the 2016 Indie International Songwriting Competition (Folk category). Each are highly acclaimed songwriters and performers in their own right as well. Jordan won the John Lennon Songwriting Battle of the Bands competition at the age of 18. He’s also toured the country with his own music and is a sought after guitar player for famous R&B artists like Ndambi and Avant. Mikaela has been a finalist in singer-songwriter competitions like the Telluride Troubadour Competition, Kerrville New Folk Competition, and Mountain Stage NewSong Contest (Southwest region). She is an in-demand vocalist and has sung background vocals for R&B diva, Chrisette Michele, and pop star Ben Folds.   Together Jordan & Mikaela are writing new music, playing shows, and recording their debut EP to be released in Fall 2016. When not in Austin, they can be found touring the country, playing everywhere from seasonal festivals to timeless music halls and intimate living rooms.”


AT THE TRADITIONS BALLROOM AFTER THE FINAL CAMP.

Headphone Disco are the inventors of the ‘silent dance party’ format and have been touring the world for the past 7 years.
Performing some huge college shows led to them being voted ‘Best Novelty Act’ 2013 by the readers of Campus Activities Magazine in March of last year. So how does it work?
We arrive at your school (or showcase!) with our 2 resident DJs and our 2 channel wireless headphones
Our DJs spin 2 different styles of music side by side over 2 different wireless channels.
Guests select which DJ they want to listen to using the switch on their headphones (provided by us) then get busy on the dancefloor.
Imagine a dancefloor where one half of the crowd are singing along to One Direction while the other half are doing The Wobble! Bizarre, mind-blowing but most of all a huge amount of fun.

Headphone Disco will be showcasing (Special Events) February 20th at 11:30pm AND will have a booth next to our Degy booth.

Cumberland Run is a country band from Nashville performing high-energy, fan-favorite music! First established in 2011, they burst onto the scene in 2014 as a house band on the Legendary Honky Tonks/Lower Broadway strip in Nashville, Tenn. at Margaritaville! Now, they are on the rotation at 2 fantastic venues in Nashville including Margaritaville and the exclusive, world famous Wildhorse Saloon after ranking into the Final Four of Wildhorse Saloon’s 2014 ‘Battle for the Saddle’ competition! They seek to dominate the country music industry with their dynamic, high-octane fueled performances and their powerful original music that transcends the limits of the dance floor. Cumberland Run is the act you cannot afford to miss!

Honey County plays story-driven country; modern, melodic pop; and punchy, guitar-fueled rock. They have had a song featured on HBO’s True Blood and appeared on VH1’s “MAKE A BAND FAMOUS”, One of the few independent bands to play Stagecoach this year

Introducing, Scratch & Bang; a dynamic and energetic live concept rocking venues, festivals and college campuses. Formed with the aim of creating a new type of act the duo have developed and refined their show into an explosive and energetic live experience.
On the Technics 1210’s is DJ Corleone, a renowned and respected turntablist in his own right. Playing opposite is Mike Bowers, a hard working and talented drummer with years of live experience
Together they de-construct, re-edit and remix massive dancefloor fillers live and on the fly in an uproarious stage show. While Corleone chops-up and scratches tracks the audience know and love Mike loops some insane live drum breaks over the top creating a wholly interactive show that not only sounds amazing but is visually stunning too.
A campus favorite, Scratch & Bang form the bridge between ‘live act’ and ‘dance party’ making them an excellent showcase choice.

Hailing from the Alternative, Pop, Rock melting pot of sunny California, The Crxssing greatly personifies the diverse sounds of their region. Their signature style, as well as technical ability, have quickly made them known, heard and enjoyed throughout the modern alt. rock scene.
The Crxssing’s knack of melody, as well as their strong writing ability, is apparent on their debut EP, True North. The EP expertly maps out a story containing bleeding-heart lyrics and vocals met with beautifully orchestrated drums, guitar and solid bass.
The group’s chemistry is closely resembled as brothers. Frontman/Guitarist Tad Kent has been a long-time collaborator & friend with Drummer/Backing Vocals Jesus Acevedo. The duo’s presence is obvious throughout their music as Kent’s vocals flow beautifully with Jesus’s signature drum grooves. They are also met with longtime colleague Damon Paraguas on Bass/Backing Vocals which furthers the group’s captivation and talent, giving The Crxssing a full and powerful sound both on and off stage.
Riding on the momentum of True North, The Crxssing is booking shows all over the west coast and plan to release their highly anticipated full length album later in 2016!

Paint University, AKA PaintU is bringing the Paint Party Experience that has been packing out nightclubs and festivals around the world to YOUR college campus! PaintU is a heart-pounding, non stop EXPERIENCE that is more than your average dance party.
PaintU will truly bring a WOW factor to your campus with their interactive party. PaintU is the one-stop professional Paint Party People, with over 100 shows to date, we do everything from setup to cleanup- and provide a true turnkey operation. The Lights, The Sounds, The Paint, and Performers that PaintU provides will make your alumni WISH they were back in class.