In a world dominated by overnight internet sensations and one-hit-wonders, emerging star Ainsley Costello has her eyes set on creating a legacy that stands the test of time. Delicately delivered yet powerfully profound, Costello’s heartfelt and personal approach to lyricism translates into a seraphic, easily digestible, and heartwarming listening experience.

At only 15, the Seattle native (now based in Nashville) released a strikingly diverse debut album titled ‘You Know I Am’ – on the surface, a collection of country pop songs, but dig deeper and you’ll unravel a multitude of diverse musical influences and lyrics that speak to the insecurities of today’s teen girls.

In February 2020, Ainsley and her family relocated to Nashville just as the world and the music industry shut down. But throughout quarantine, Ainsley used her time to write new material and connect with dozens of Nashville “row writers” to hone and perfect her craft. Creating a body of work that speaks volumes for her young age Ainsley already has a catalogue of over 150 unreleased, and 22 published songs. In 2021 Ainsley released a song each month, the equivalent of her second studio album, and now has 20 studio recorded and released songs.

Ironically, after moving to Nashville (the country music capital of the world), Ainsley made a hard pivot away from the country music that had originally inspired her. Realizing that Nashville was more than just country music opened her ears and heart to a more pop-rock vibe. Learning that some of her favorite bands, Paramore and Kings of Leon, & Caitlyn Smith all hailed from Nashville sent her on a journey – one she is still discovering – to find her own sound and style. With her next upcoming single “Little Sister”, you’ll hear that Ainsley has clearly managed to take a strain of LA pop/rock (some describe it as college-acoustic rock) and bring it down South while turning heads and amassing a dedicated fanbase in
the process.

Ainsley cut her teeth performing in a variety of school talent shows and musical theater productions starting at the age of 7. She has since gone on to study piano, guitar, vocal performance, and songwriting. At just 15, Ainsley began taking classes at the prestigious Berklee College of Music while simultaneously working on her high-school finals. She graduated from high school at 16 and was formally accepted to the Berklee College of Music’s Business Degree program shortly after. She is now finishing up her sophomore year of college at Berklee and is still only 17.

At a very young age, Ainsley began performing live shows with a full band of adult professional-level musicians. She could regularly hold down a 3-hour cover set at just 14 and turned heads when you heard this tiny blonde girl sing “Folsom Prison Blues”. Prior to COVID, Ainsley impressively had already performed over 130 shows in 10 states. Notable performances included shows at NAMM in 2019 and 2020, and Americana Fest 2019. She was also involved with both “The Voice” and “American Idol” when she was just 13. At 14, Ainsley became one of Breedlove Guitars youngest endorsed artists and has also since been endorsed by Mackie Sound by Loud Audio. 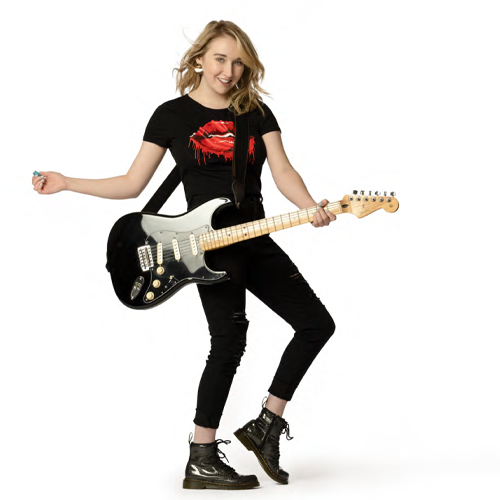