British bassist, Charles Berthoud (pronounced BEAR-too), is changing the way we think about the bass guitar. As one of the most exciting and versatile new bass players on the world stage, his compositions are both moving and beautiful, showing off a technique that he is helping to bring to the mainstream. Already being recognized as one of the masters of the two-handed tapping technique, he plays the bass like a piano, accompanying himself with multiple parts. A classically trained pianist and multi-instrumentalist, Charles uses contemporary guitar techniques to play astonishingly fast, almost flamenco-like passages. Mastering his instrument through years and countless hours of practicing, Charles’ compositions range from the drama of a film score to the peaceful tranquility of a piano sonata.

In 2011, Charles was stuck. Working as a baggage handler at an airport near his suburban London home, he was attending university as a physics major by day and dreaming of coming to America to make music by night. Since he was a young boy, he had idolized the great American bassists, especially Flea of the Red Hot Chili Peppers, Victor Wooten, Jaco Pastorius, and, of course, James Jamerson. He knew that if he wanted to realize his dream, it was now or never. Soon thereafter, Charles was accepted into the prestigious Berklee College of Music in Boston, and off he went to study with the best class of musicians in the world. There, mentored by New England bass impresario, Jim Stinnett, Charles was introduced to the two-handed tapping technique that would come to define much of his own music. Before graduating Berklee with highest honors, Charles co-authored an instructional book, Two-Handed Tapping, with Stinnett. Now, his talents are in high demand as a touring and studio musician.

Half British, half Finnish, and living in the United States, Charles Berthoud is an international artist in the truest form. Artists from all over the world, including the USA, India and Brazil, have been eager to collaborate with him. It doesn’t seem to matter the style. Whether it’s pop/rock/country, celtic/bluegrass/funk, or progressive folk, Charles’ playing transcends genre. That may explain why, at such a young age, he has conducted workshops and clinics across the northeast, including at Berklee and the New Hampshire Bass Fest.

Whether on bass guitar, piccolo bass or piano, audiences are captivated by his music, and amazed by his world-class virtuosity. After touring and recording as a sideman on a dozen records and tours, Charles now has two solo albums under his belt. While New Age of Solo Bass introduced his technical skills to the world, his follow up, Don’t Look Back, is a compositional tour de force. The songs are beautiful and moving, reminding the listener that there are still new frontiers to be explored in popular music. If Charles Berthoud is the one to chart this new territory, then music lovers are in good hands. 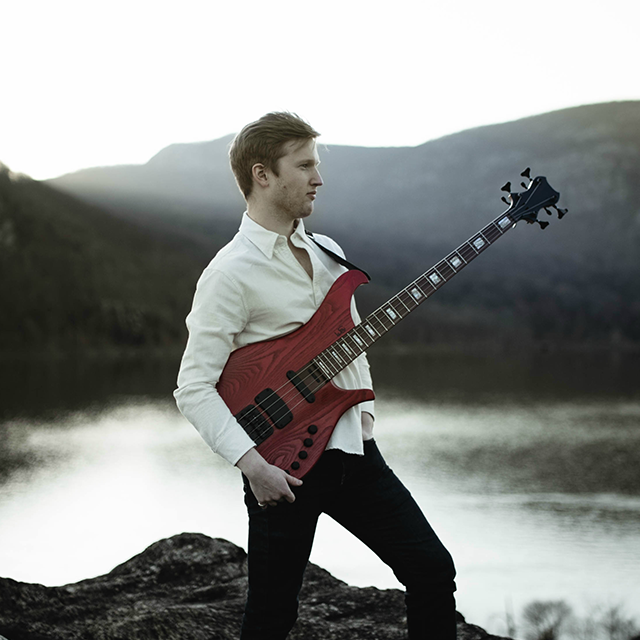