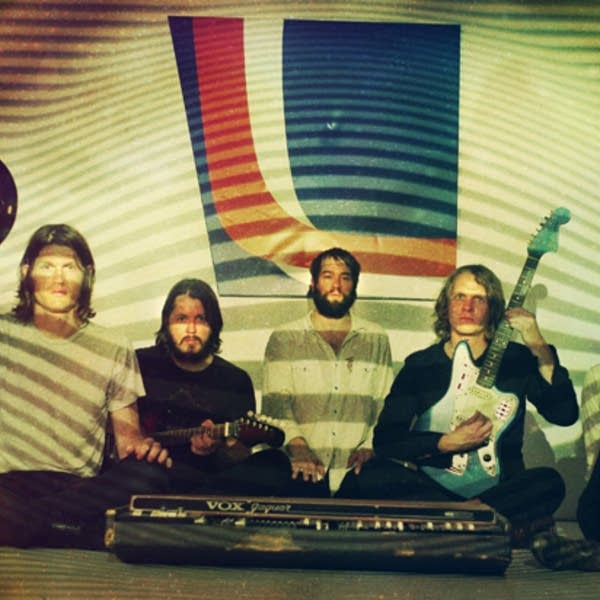 Formed in May 2004, the Black Angels took their name from the Velvet Underground song “The Black Angel’s Death Song”.

In 2005, the Black Angels were featured on a dual-disc compilation album of psychedelic music called Psychedelica Vol. 1 from Northern Star Records. This, along with the growing popularity of their MySpace page, gave the band a jump in popularity in the underground scene.

The group’s debut LP Passover was generally well received in the underground independent rock community and was noted for its dark tones and lyrical content. A review of Passover described them as “Walking in the shadows cast by Spiritualized mastermind Jason Pierce”, invoking “dirges” reminiscent of the 13th Floor Elevators. Passover included a quote in the liner notes from Edvard Munch; “Illness, insanity, and death are the black angels that kept watch over my cradle and accompanied me all my life.” The band was featured on the soundtrack of the 2007 Kevin Bacon movie, Death Sentence, on the second episode of FOX’s Fringe, and in the ninth episode of Californication.

On Friday, August 5, 2007, they played at Lollapalooza in Chicago. Among other venues, they have also played at SXSW 2006 & 2008 and All Tomorrow’s Parties 2008. Touring partners have included the blues rock band The Black Keys, Black Rebel Motorcycle Club, The Warlocks, Roky Erickson, The Brian Jonestown Massacre, Queens of the Stone Age, The Raveonettes, Wolfmother, and The Horrors.

They released their second album Directions to See a Ghost in 2008. Songs from Directions to See a Ghost were also featured in The History Channel’s 2009 documentary, Manson. Their song “Young Men Dead” was featured on the March 17, 2010 episode of UFC Primetime, “St. Pierre vs. Hardy,” on Spike. “Young Men Dead” was also included on the soundtrack for the 2011 snowboard movie The Art of Flight.

Between October 28, 2008 and November 2, 2008, the band performed as Roky Erickson’s backing band on the West Coast; future plans between Roky and the Black Angels are in the works. The band featured on Unkle’s May 2010 release, Where Did the Night Fall, collaborating on a song called “Natural Selection”.

The 4th annual Austin Psych Fest ran from April 29-May 1, 2011, and was held at the Seaholm Powerplant (the last event to be held inside the building) and featured Roky Erickson, Spectrum, Omar Rodriguez Lopez Group, Atlas Sound, Black Moth Super Rainbow, Prefuse 73 and A Place To Bury Strangers topping a lineup of 55 bands.

The band’s fourth album, Indigo Meadow, was released on April 2, 2013 and they embarked on a tour across the United States in May 2013 in support of the album.

In February 2014, the Black Angels covered a version of “Soul Kitchen” for A Psych Tribute to the Doors, released by Cleopatra Records.

The 7th annual Austin Psych Fest was held during May 2–4, 2014 at Carson Creek Ranch next to the Colorado River and featured a rare Friday night performance from the legendary 1960s baroque pop band The Zombies, The Dandy Warhols and The Brian Jonestown Massacre performing together on the same stage, the psychedelic folk band Quilt (band), the electronica duo Peaking Lights, Temples (band), an incendiary performance from Japanese drone rock band Acid Mothers Temple in which several instruments were lit on fire, Sleepy Sun, The War on Drugs (band), and Loop (band).

In December 2014, the Black Angels released a split single, along with Sonic Jesus, called “Molly Moves My Generation”.

The 8th annual Austin Psych Fest, now renamed Levitation, was held from May 8–10, 2015 at Carson Creek Ranch and featured an impressive lineup, including a rare 50th anniversary reunion of pioneering Texas psychedelic rock band The 13th Floor Elevators, The Flaming Lips, Tame Impala, The Jesus and Mary Chain’s 20th anniversary performance of Psychocandy in its entirety, Spiritualized, Primal Scream, and Earth (American band). Melody’s Echo Chamber, and Rose Windows (band) were scheduled to perform, but Rose Windows announced their breakup prior to the event and Melody’s Echo Chamber had travel issues and had to cancel.

The band released their fifth album Death Song in 2017.

Looking to Book The Black Angels?