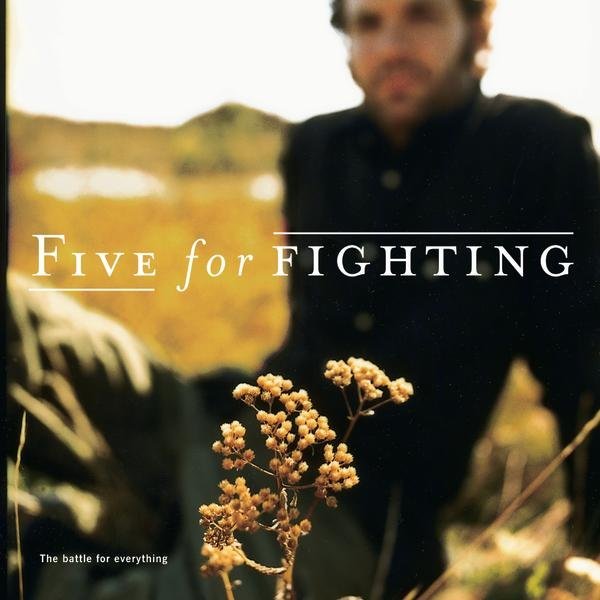 Originally, Aware Records’ Mark Cunningham was a big fan of Five for Fighting and made initial contact with Ondrasik. Cunningham then passed Ondrasik’s demos to the label’s new A&R Steve Smith. Smith loved the recordings and after a discussion with Aware head Gregg Latterman, they met with Ondrasik and set up a deal shortly afterwards in partnership with Columbia Records.

His second album, America Town, was released on September 26, 2000. The album had impact, but specifically “Superman (It’s Not Easy)” was a commercial success, reaching number 14 on the Billboard Hot 100 chart. The hit single eventually became an anthem after the September 11 attacks where Ondrasik went on to perform the song at The Concert for New York City in late 2001. While America Town did not reach the top 50 of the Billboard 200 chart, the album’s first single, “Easy Tonight”, became a number one Triple A song and consistent album sales eventually led to it being certified Platinum.

Two years later, the album Two Lights was released; this became his first career top 10 album, debuting at number 8 on the Billboard 200 chart in August 2006. Its first single, “The Riddle”, became Ondrasik’s third career top 40 hit on the Billboard Hot 100 chart, peaking at number 40. It reached number 3 on AC charts and number 7 on Hot AC charts. The second single, “World”, reached number 14 on Hot AC charts and the music video has been used to raise funds for various charities and as a theme for NASA’s International Space Station (see Philanthropy below).

His fifth studio album, titled Slice, was released on October 13, 2009, and appeared on the iTunes top 10 albums on the first day. The album was produced by Gregg Wattenberg (“Superman,” “100 Years”). Academy Award-winning composer Stephen Schwartz, who penned the songs for musicals such as Wicked, Godspell and Pippin, co-wrote the title track, as well as the track “Above the Timberline.” On July 21, 2009, the first single from Slice, called “Chances”, was released for digital download. “Chances” was featured at the end title of the hit movie The Blind Side. “Chances” reached number 11 on the Hot AC radio chart.

On May 27, 2010, Ondrasik announced that he had left Columbia Records and his album Slice would be re-released on Wind-up Records along with the song “Slice” being released as a single in July 2010.

On February 20, 2011, Five for Fighting performed at the 2011 NHL Heritage Classic in Calgary, with the Calgary Flames facing off against the Montreal Canadiens.

With over 2.5 million albums sold and America Town and The Battle for Everything, both achieving Platinum status, Ondrasik continues to write and perform, even writing and co-writing music for other artists, including the Backstreet Boys and Josh Groban. He has also contributed to movie soundtracks such as August Rush, We Were Soldiers, Chicken Little, and Everyone’s Hero, and in 2008 Ondrasik wrote and recorded the song “Brothers in Arms” for the award-winning documentary film Brothers at War. Ondrasik wrote and recorded the original song “All for One” for the 100th episode of the television series Hawaii Five-0. The song was released as a single on November 7, 2014, the same date the episode aired. His song “100 Years” was featured in the final scene of the final episode of the TV series JAG.

On September 12, 2016 Five for Fighting released the single “Born to Win.” The song debuted during the opening montage of the season 8 finale of American Ninja Warrior.

Looking to Book Five For Fighting?