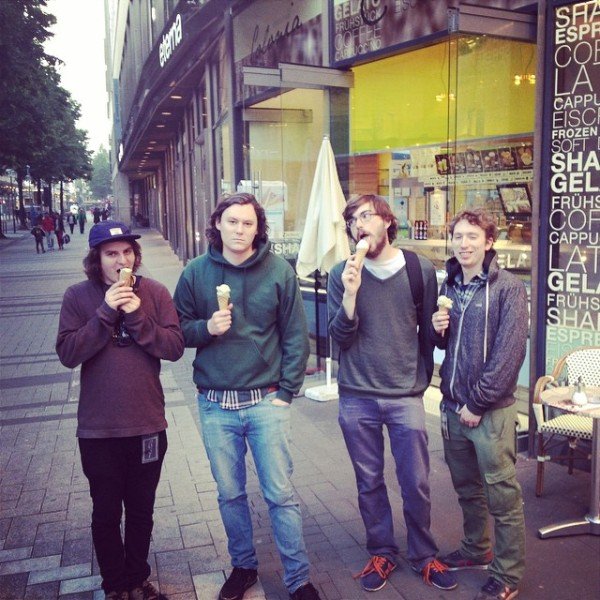 The band consists of Brian Sella (vocals, guitar), Mat Uychich (drums), Tom Warren (bass) and Ciaran O’Donnell (keyboards, guitar, trumpet). Around 2010, the band started writing material for what would become their self-titled album. They released an EP called “Slow Dance To Soft Rock” which contained six tracks later remastered for the LP. A second EP, “Grip N’ Tie”, was planned to be released later that year but was cancelled. The songs that were on it were instead combined with the previous EP to produce an entire album. In late 2010, the band filmed a music video for “Maps” and posted it on YouTube, which gave them great exposure. On June 2, 2011, the band had announced that they signed with Bar/None Records and would release their self-titled debut studio album on September 6, 2011.

As of fall 2010, Brian Uychich left the band to concentrate on school full-time. He then started a new band known as Zak Spade and The Love Enemies, of which Sella and Mat Uychich & Lee Hartney are alleged members. They replaced him with a new touring member, Drew Villafuerte, who also plays bass in addition to keyboards. Around 2012, Villafuerte stopped touring with the band as well, citing the extensive touring as too difficult. He was replaced by Tom Warren and Ciaran O’Donnell.

The Front Bottoms performing in Columbia, South Carolina on March 19, 2016.

On June 17, 2014, the band released an EP entitled Rose, a 6-track record that contains 6 songs previously heard on their early independent releases which were re-recorded. As Sella claimed, “These are the songs that people ask for when we’re on tour. They’re songs that we’ve either played live at shows or we’ve had kicking around that we couldn’t let go of. These songs were also Mat’s grandmother Rosemary’s favorite songs, so it was kinda fittin that we named this EP Rose.” The music video for “Twelve Feet Deep” shows the band, along with members of the audiences shown, wearing masks depicting the drawing of Rosemary’s face that is featured as the album cover. In an interview, Sella stated that “the idea is to do sort of a ‘Grandma series”, record a bunch of old songs and release them,” going on to say that the next in the series will likely be entitled “Anne”.

On April 18, 2015, Run For Cover and Bar/None Records released two songs by the band, and two songs by rapper GDP on a split EP entitled “Liberty and Prosperity”. It features the songs “Wolfman” and “Handcuffs”.

In June 2015, it was announced they had signed to the label Fueled By Ramen

The Front Bottoms released their third studio album “Back On Top” on September 18, 2015 via Fueled By Ramen

On March 7, 2016, The Front Bottoms released a new song titled “Noodle Monster” on the Fueled By Ramen YouTube Channel.

On June 26, 2016, festival website Pitchfork released a music video for the song “Ginger” from the album “Back on Top.” The video was directed by Marlon Brandope and shot in Cranston, Rhode Island.

In November 2016, The Front Bottoms went on their UK/EU tour with support from Apologies, I Have None and Gnarwolves.

Looking to Book The Front Bottoms?