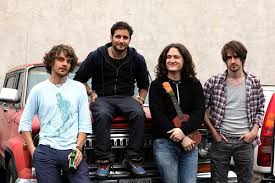 They are also an animated band that are fronted by four fictional unnamed characters, that are referred to as Eskimo (Vocals/Keys), Penguin (Lead Guitar), Monkey (Bass Guitar/Horns), and Giraffe (percussion). These characters are present in media such as album artwork, music videos, online content, and sometimes appear in live shows.

In 2010, the band’s debut single, “Kandi”, secured a 6-week No. 1 spot on the AAA charts and received the Song of the Year 2010 AAA Music Award. This opened doors to perform on such shows as The Tonight Show with Jay Leno, Jimmy Kimmel Live! and multiple appearances on The Ellen DeGeneres Show, who even called the band back for Ellen’s special birthday show in January 2011.

After signing to U.S. label Shangri-La Records, the band loaded into a van and drove across all 50 states to tour, collecting new fans in each city they played. They appeared at Coachella and Mile High Festival, and supported the likes of Tricky, Faithless, Tori Amos, Gomez and Michael Franti & Spearhead.

In 2008, Leontiou teamed up with an animation team, Gravy Media, to produce an animated video for the band’s song, “Hometime”, which went on to win the British Animation Award in 2008. This video took the band across the pond to secure a partnership with Warner Premiere and together developed a 10-part animated movie “All Balloons” for which One Eskimo delivered the story, music, character design and sound-design.

Their second album, Faster Than Turtles, was originally slated for a 2012 release, but the album was delayed for several years. As of 2016, a digital download of the album is available from the band’s website.

Looking to Book One Eskimo?