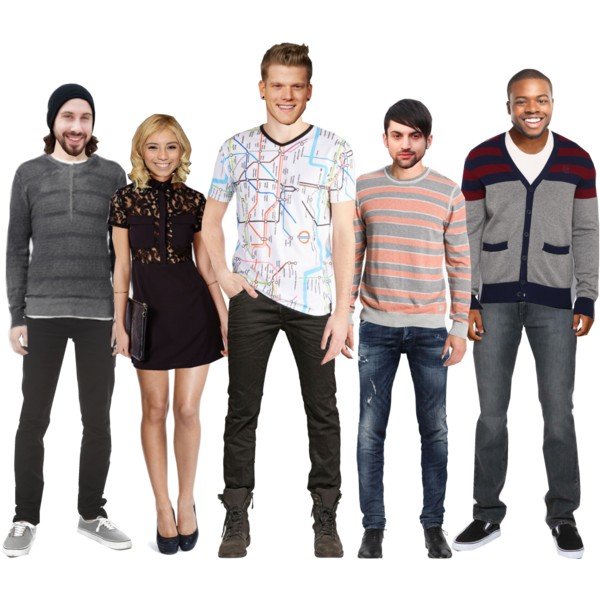 Characterized by their pop-style arrangements with vocal harmonies, basslines, riffing, percussion and beatboxing, they are widely known for their covers, mostly of modern pop works or Christmas songs, sometimes in the form of medleys, along with original material. Pentatonix formed in 2011 and subsequently won the third season of NBC’s The Sing-Off, receiving $200,000 and a recording contract with Sony Music. When Sony’s Epic Records dropped the group after The Sing-Off, the group formed its YouTube channel, distributing its music through Madison Gate Records, a label owned by Sony Pictures. With over 11.5 million subscribers and 1.80 billion views, Pentatonix’s YouTube channel is currently the 13th most-subscribed music video channel. The group’s video tribute to Daft Punk had received over 210 million views as of late 2014.

Their debut EP PTX, Volume 1 was released in 2012, followed by their holiday release PTXmas the same year, with Pentatonix’s third release, PTX, Vol. II, debuting at number 1 on Billboard’s Independent Albums chart and number 10 on the Billboard 200 in 2013. In May 2014, Pentatonix signed with RCA Records, a “flagship” label of Sony Music Entertainment, while in the same year, the group released their fourth EP, PTX, Vol. III, and two full-length studio albums; PTX, Vols. 1 & 2, a compilation album released in Japan, Korea and Australia, and their second holiday release, That’s Christmas to Me, with the album certified gold by the Recording Industry Association of America (RIAA), platinum on December 24, 2014, and double platinum on February 11, 2016, becoming the highest-charting holiday album by a group since 1962, and the fourth-best-selling album in the United States in 2014. The following year, Pentatonix released their eponymous album, their first consisting mostly of original material, which debuted atop the US Billboard 200 chart for the first time in their career, followed by a third Christmas album, A Pentatonix Christmas, in 2016, and a new EP, PTX, Vol. IV – Classics, the following year.

Pentatonix have won three Grammy Awards: they were the first a capella act to win Best Arrangement, Instrumental or A Cappella, doing so in 2015 and won 2016, and Best Country Duo/Group Performance in 2017.