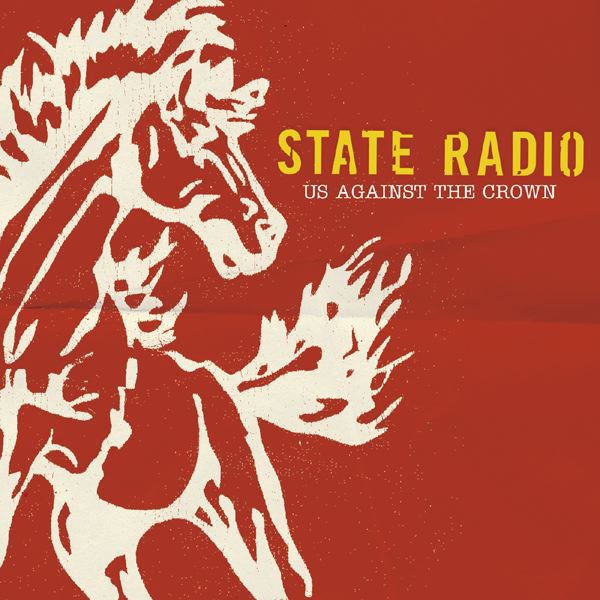 The band’s songs focus on social and political issues and have been musically described as a combination of reggae, punk and rock. Chad Urmston, whose previous band Dispatch disbanded in 2002, formed State Radio later the same year in Sherborn, Massachusetts with second guitarist Pete Halby, bassist Chuck Fay, and drummer Mike Greenfield. The band, originally known as Flag of the Shiners, released an eponymous debut EP on Fenway Recordings in late 2002. The EP was later re-released under the band’s current name, however the title remained the same.

State Radio went on a temporary hiatus throughout 2003 as Urmston recovered from throat surgery. They returned to touring and recording in 2004 as a slimmed-down trio with new drummer Brian Sayers. The band released a second EP entitled Simmer Kane in March 2004. This EP was a departure in style from the debut EP Flag of the Shiners as it featured acoustic guitar and Erin Lashnits Coughlin (“Ras LC”) on vocals. In December 2005, State Radio released its first LP, Us Against the Crown. After touring for a few months in support of this album, drummer Michael Najarian was brought in to replace Brian Sayers, playing his first show at Emo’s in Austin, Texas. With this lineup, the band recorded and released their second album Year of the Crow in September 2007.

State Radio opened for Dave Matthews Band on May 30th and 31st, 2008 in Burgettstown, Pennsylvania, and on June 3rd and 4th, 2008 in Camden, New Jersey. In August of that year, State Radio played at a concert near the 2008 Democratic National Convention alongside Rage Against the Machine and other politically active bands as an act of protest against the Iraq War.

Official recording sessions for State Radio’s third album began on November 3, 2008 in North Brookfield, Massachusetts at Long View Farm Studios. The album, entitled Let It Go, was released on September 29, 2009. In support of the album, State Radio launched their winter 2010 U.S. tour, titled “Lefty Rides Again.” State Radio also completed a small European tour during the last two weeks of March 2010. At the beginning of summer 2010, State Radio embarked on a cross-country tour, opening for John Butler Trio during their April Uprising North American Tour. The latter two were co-headlining shows. At the end of the summer, the band returned to Germany for several more festival dates.

In 2010, the band won Best Social Action Song from the 9th Annual Independent Music Awards for “Calling All Crows”.

The band’s fourth album Rabbit Inn Rebellion was released on October 23, 2012. Guest appearances on the album include backup vocals by Matt Embree, Darren Buck and Kevin Kinsella, violin by Sarah Parkington on “Take Cover,” guitar by Johnny Trauma on “Black Welsh Mountain” and Milt Reeder on “Freckled Mary,” and vocals as well as additional lyrics by Mackie Cromwell on “H.A.C.K.I.N. (Yeah Man).” A music video for “Freckled Mary” was released on October 15, 2012, directed by Michael Parks Randa.

In September 2013, it was announced on State Radio’s website and on their Facebook page that Mike “Maddog” Najarian had left State Radio to pursue a career in finance. Chad wrote, “Above all, he drummed his ass off every night and it was an honor to share the stage with him and feel that mac truck energy coming from the kit.” As of 2016, State Radio remains without a drummer.