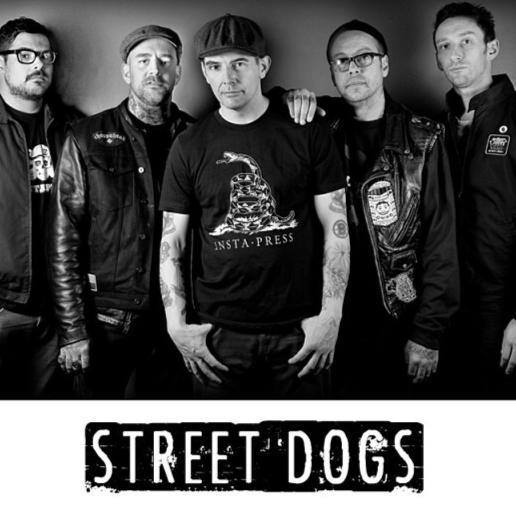 In 1998, McColgan left Dropkick Murphys “to pursue a lifelong dream of becoming a firefighter for the Boston Fire Department.” In 2002, McColgan decided he could no longer stay away from music and formed Street Dogs. They first recorded a seven song-demo, which feature McColgan along with his former Dropkick Murphys bandmate Jeff Erna on drums, Rob Guidotti on guitar and Bill Close on bass. They signed with CrossCheck Records in 2002, with Michelle Paulhus now on bass. By the time they started recording their first album, they yet again had someone else on bass, this time Johnny Rioux. Savin Hill (which was produced by former The Mighty Mighty Bosstones member Nate Albert and featured guest appearances by Al Barr and Ken Casey from Dropkick Murphys) was a success and resulted in a supporting tour with Celtic punk band Flogging Molly.

The band underwent a complete shuffle in 2004 when McColgan took a leave of absence from his firefighting career to devote time to recording and promoting their second album Back to the World.The Street Dogs at this time enlisted Marcus Hollar on lead guitar, and expanded the range of their sound with the addition of rhythm guitarist Tobe Bean III. The drummer’s spot was filled by Joe Sirois, formerly of The Mighty Mighty Bosstones.

Their second release, Back To The World, proved to be even more of a success for the band. It was hailed critically in the United States, Europe and Japan and opened the doors to touring with the notable likes of Social Distortion, Tiger Army, Bad Religion, Millencolin (in Europe), The Bouncing Souls (US And Japan) and The Briefs. The band also toured on the Vans Warped Tour in the summer of 2005 and embarked on their first headlining tours in the US and Europe.