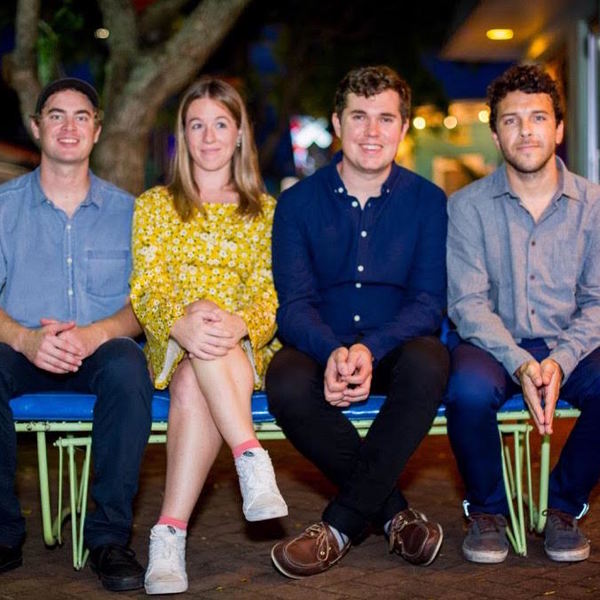 The band’s 2009 debut single, “Swim”, gained much critical acclaim and was named as the 37th best track on Pitchfork’s 100 Best Songs of 2009. They released their debut album, Astro Coast, in January 2010.

The band were widely considered to be the breakout band of 2009’s CMJ Music Marathon. In March 2010, playing songs from their debut album, Astro Coast, Surfer Blood made quite a splash at the SXSW NPR music party (and returned to SXSW in 2011). In May 2010, the band played at the ATP music festival curated by Pavement along with other groups such as Broken Social Scene, The Walkmen, and Atlas Sound. Later that month, Surfer Blood headed over to Spain to join the lineup at the San Miguel Primavera Sound Festival. In August of that year, Surfer Blood finished out the summer playing two more festivals; Splendour in the Grass in Australia and Summer Sonic in Tokyo.

The band was chosen by Les Savy Fav to perform at the ATP Nightmare Before Christmas festival that they co-curated in December 2011 in Minehead, England.

On October 25, 2011, Surfer Blood released the Tarot Classics EP on Kanine Records. The EP’s first single “Miranda” debuted on Pitchfork on August 30, 2011 and “I’m Not Ready” was named NPR’s Song of the Day on December 8, 2011.Artists that contributed remixes to the EP include Totally Sincere (Connor Hanwick of the Drums and Peggy Wang of The Pains of Being Pure at Heart), Speculator, School of Seven Bells and Allen Blickle.

The band opened for the Pixies during their Doolittle Lost Cities Tour in 2011. The tour came about after Pitts met the Pixies in an airport in New Zealand and they said they were already familiar with Surfer Blood’s music. Surfer Blood performed a cover of their song “Gigantic” for The A.V. Club’s music-video series “AV Undercover” which Pitts says he’d like to think that was “the needle that broke the camel’s back when it came to the decision” to tour with them.

On January 9, 2012, they appeared on Late Night with Jimmy Fallon where they performed the single “Miranda” off of Tarot Classics. The next day, news spread that the band would be entering the studio in February 2012 with producer Phil Ek (Fleet Foxes, Built to Spill) to record their highly anticipated second album which was released on Warner Bros. Records.

In May 2012, the band confirmed via their Twitter account that they were moving to California on May 12, 2012 to record their second album with legendary producer Gil Norton.

On January 21, 2013, they uploaded a new song off their next album, Pythons, called “Weird Shapes”.

In February 2014, the band announced that work on their third record had begun.

On May 20, 2014, the band debuted a video of them playing a new song titled “Island”. The song has been played before back in 2011, during various radio sessions.

On September 16, 2014, a new song titled “NW Passage” was debuted on Soundcloud, as part of their split single with We Are Scientists.

On February 17, 2015, the band announced their third album “1000 Palms” and that it would be released on Fierce Panda / Joyful Noise Recordings on May 12. The lead single, “Dorian”, was premiered on BBC Radio 1 at midnight.

Original guitarist Thomas Fekete left the band in 2015 shortly after the announcement of their third album, “1000 Palms,” due to a medical diagnosis for a rare form of cancer (sarcoma) that had spread to his lungs and spine. He was diagnosed in the winter of 2014. The band announced a fundraising effort to help alleviate Thomas’ medical bills through the site GoFundMe on April 20, 2015. On May 31, 2016, Fekete’s wife Jessica announced that he had died.

In April 2015, the song “Swim” was featured in an episode of the Netflix series “Daredevil.”

The band’s fourth album, Snowdonia, was released on February 3, 2017. It is the first album the band has released following Fekete’s death, and features Mills and guitarist Michael McCleary.