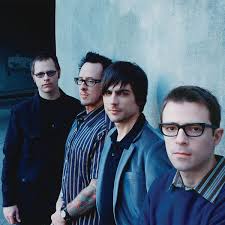 Weezer has sold 9.2 million albums in the US and over 17 million worldwide.

After signing to Geffen Records in 1993, the band released its debut self-titled album, also known as the Blue Album, in 1994. Backed by successful music videos for the singles “Buddy Holly”, “Undone – The Sweater Song” and “Say It Ain’t So”, the Blue Album became a triple-platinum success. Weezer’s second album, Pinkerton (1996), featuring a darker, more abrasive sound, was a commercial failure and initially received mixed reviews, but went on to achieve cult status and critical acclaim years later. Both the Blue Album and Pinkerton are now frequently cited among the best albums of the 1990s. Following the tour for Pinkerton, bassist Matt Sharp left the band and Weezer went on hiatus.

In 2001, Weezer returned with another self-titled album, also known as the Green Album, with new bassist Mikey Welsh. With a more pop sound, and promoted by singles “Hash Pipe” and “Island in the Sun”, the album was a commercial success and received mostly positive reviews. After the album’s release, Welsh left the band and was replaced by current bassist Scott Shriner. Weezer’s fourth album, Maladroit, was released in May 2002 to mostly positive reviews but weaker sales.

Weezer’s fifth album, Make Believe, was released in May 2005; despite mixed reviews, its single “Beverly Hills” became Weezer’s first single to top the US Modern Rock Tracks chart and the first to reach the top ten on the Billboard Hot 100. In June 2008, Weezer’s third self-titled album, also known as the Red Album, featuring “TR-808s, synths, Southern rap, and baroque counterpoint”, was released to mixed reviews. Its lead single, “Pork and Beans”, became the band’s third song to top the Modern Rock Tracks chart, backed by a successful YouTube music video.

Weezer’s seventh and eight albums Raditude (2009) and Hurley (2010), featuring more “modern pop production and songs co-written with other artists, achieved further mixed reviews and moderate sales. The band’s ninth and tenth albums, Everything Will Be Alright in the End (2014) and the self-titled album also known as the White Album (2016), returned to a rock style and achieved more positive reviews.