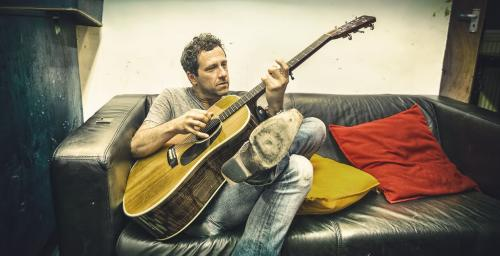 He independently released his first CD, Live At The Exit/In, a live set recorded at the Nashville club. His original sound drew much attention and, through constant touring, he was able to release his first studio album, Carousel.

Hoge caught the attention of Atlantic Records music executives and he was signed to a record deal in early 2002. Atlantic then re-released Carousel to a wider market. His 2003 major label debut, Blackbird On A Lonely Wire was a cleaner sounding effort; however, the album was poorly promoted by Atlantic. Eventually, Hoge asked for and received a release from his contract, re-obtaining the rights to Carousel.

The support of his fans has given Hoge the ability to tour incessantly, and self-release a couple live albums (2004’s Almost Alone: Live At Smith’s Olde Bar’ and 2005’s During the Before and After), a politically charged album called The America EP (which included a cover of Bob Dylan’s “The Times They Are A-Changin’)”, and a bluesy rock and roll sounding album, The Man Who Killed Love.

Over the years, Hoge has toured with many artists, including Midnight Oil, Shinedown, Needtobreathe, Marc Broussard, ZZ Top, The Cat Empire, Squeeze, Jason Isbell, Lisa Loeb and Edwin McCain. Bands that have opened for him include Steel Train, The Trews, The Elms, Rose Hill Drive, Needtobreathe, Moses Mayfield, The Alternate Routes, Aslyn, Katie Herzig, Missy Higgins, and The Civil Wars.

Hoge recorded the opening theme song, “You Make Me Happy,” for the CBS sitcom Still Standing.

On February 20, 2007, he released a live album, Again Somewhere Tomorrow, from recordings made during the band’s two-night stint at the Exit/In in Nashville, in September 2006.

The band’s fourth studio album, Draw the Curtains, was released nationwide in October 2007 by Rykodisc Records. The album was initially released as a CD, with a limited edition 180-Gram Vinyl Record version which followed later.

Looking to Book Will Hoge?