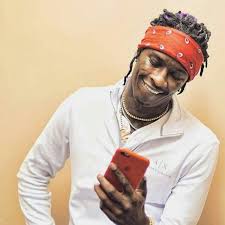 Known for his unconventional vocal style, fashion, and persona, he first received attention for his collaborations with fellow Southern rappers, such as Rich Homie Quan, Birdman, Waka Flocka Flame, T.I., and Gucci Mane. Young Thug initially released a series of independent mixtapes beginning in 2011 with I Came From Nothing. In early 2013, he signed a record deal with Gucci Mane’s 1017 Records and later that year he released his label debut mixtape 1017 Thug, which featured the track “Picacho.”

Young Thug received mainstream recognition in 2014 with the songs “Stoner” and “Danny Glover” in addition to appearances on several singles, including “About the Money” and “Lifestyle.” That year, he also signed to Lyor Cohen’s 300 Entertainment and collaborated on the mixtapes Black Portland and Rich Gang: Tha Tour Pt. 1. In 2015, he released a number of mixtapes, including Barter 6 and two installments of his Slime Season series. These were followed in 2016 by the mixtapes I’m Up, Slime Season 3, and Jeffery in anticipation of his long-delayed debut studio album, Hy!£UN35.