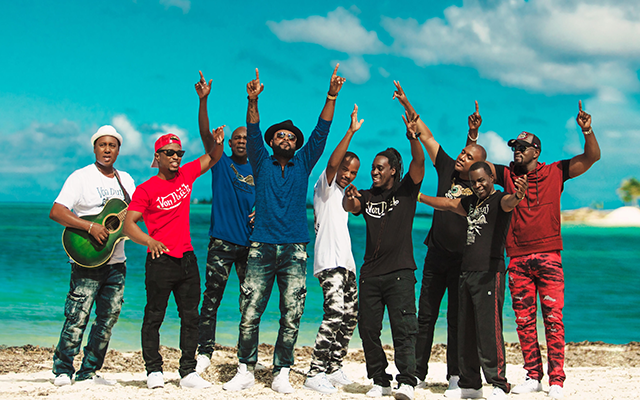 During the summer of 2000, the one of the most familiar, yet unanswered questions, “Who Let the Dogs Out”, launched one of the most beloved bands, the Baha Men, into our hearts and homes. Their pulsating Island rhythms seemed to appeal to everyone, as “Who Let the Dogs Out”immediately rose to the top of the charts throughout the world. They were a band long before this moment, but as Rolling Stone Magazine declared, “After 20 years, the Baha Men are an overnight success.”

The song earned the band several awards; a Grammy Award in 2000, a Billboard Music Award for World Music Artist of the Year and World Music Album of the Year; a Nickelodeon Kids Choice Award forFavorite Song and in 2002, they won another Kids Choice Award for Favorite Band. The Baha Men had effectively modernized ‘Junkanoo’, one of the most celebrated art and music forms in the Bahamas.

In addition to numerous industry music awards, their worldwide success propelled them into the Hollywood Film Industry, with a number of their songs enhancing soundtracks of popular movies, such as Miss Congeniality, Around the World in 80 Days, Garfield: The Movie, Rugrats in Paris, and Crocodile Hunter: Collision Course. The Baha Men also were featured in the soundtrack of Shrek, with their hit song “Best Years of Our Lives”.  Then in 2009, in the hit comedy The Hangover, “Who Let the Dogs Out?” was featured.

The Baha Men were one of the many artists to record a song on the DisneyManiaalbum, along with three of its four sequels. They recorded “Hakuna Matata” from The Lion King; “It’s a Small World” from the Disney park attraction of the same nameand in DisneyMania 4 they took on the song “Hawaiian Roller Coaster Ride” from Lilo and Stitch entitled “Bahaman Roller Coaster Ride”.

The Baha Men have continued to do what they love best – touring and creating new music. In 2014, the Baha Men, with the support of their new label SONY Music Entertainment, shared a new single “Night & Day” with the world. It was immediately selected for the FIFA, SONY Music Entertainment, ‘One Love, One Rhythm’, Official 2014 FIFA World Cup Album, alongside Pitbull, featuring Jennifer Lopez & Claudia Leitte, Santana & Wyclef featuring Avicii & Alexandre Pires, Shakira, and many more. The band also performed the halftime show for the New York Giants/Dallas Cowboys football game in 2015 and their album, “RIDE WITH ME”, was released soon after, produced by Grammy winner Troyton Rami (Sean Paul, Beenie Man, Tego Calderon and Wayne Wonder).

Today, the Baha Men are recording yet more new music, with producers Troyton Rami (Sean Paul), and DJ Buddha (Pitbull). The first single is ‘BUMPA’, was released Feb 22nd, 2018. You can also find them back on the road, touring internationally and domestically. One thing remains clear for this beloved band… on stage, they transcend into a musical experience, not just with their voices but their souls.